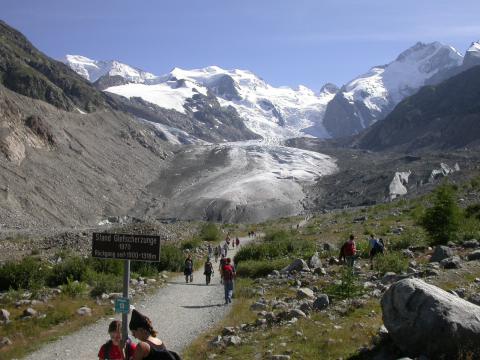 The CHR hosts a workshop on 'Runoff from snow- and glacier melt in the River Rhine and its tributaries by the background of climate change'. During the workshop the final results will be presented by the research partners and discussed. We work with invited speakers only.

The project was jointly carried out by the universities of Freiburg/Germany and Zurich/Switzerland and  the Hydron GmbH/Germany. The aim of the research project was to determine and analyze the contributions of  snow and glacier melt to the discharge in the River Rhine and its tributaries throughout the 20th century at  a high-temporal resolution. The necessary main working-steps and challenges were versatile. Discharge records from glaciated catchment areas are generally quite short and therefore empirical analyses are limited to certain time periods. Nevertheless, these allowed an insight into the sensitivity of hydrology in relation to climatic changes. In addition, glaciers and human alterations changed river flow to a large extent during the 20th century. To apply hydrological models for the quantification of the discharge components with different origin, it was important to have a consistent reconstruction of meteorology as model input. Furthermore the models must describe the glaciers’ evolution/development (and herewith the storage change in the water balance) as well as the short- and long-term variability in discharge in a correct manner. This required  further development  and changes of the models used and  a good multi-criteria calibration and model validation.

The workshop will present the project activities and the results and will integrate contributions of invited experts. The following themes are scheduled: