From the source to the mouth

Subtitle
The sediment balance of the Rhine in the period 1901-2010
Author
Gudrun Hillebrand and Roy M. Frings
Date of publication
18 Sep 2017

The actual and future morphological development of large rivers has major effects on society. A sound understanding of the morphological development requires a basin-scale sediment budget analysis that considers the grain size specific morphodynamics along the river channel. In this report we present a unique, detailed, basin-wide, and fraction-wise, morphological analysis of the Rhine, one of the world’s larger rivers. The objectives were: (a) to quantify the downstream fluxes of clay, silt, sand, gravel and cobbles and (b) to identify the sources and sinks of these sediments. We reviewed a large number of morphological studies about the Rhine and re-analysed existing data, such as echo soundings and sediment transport data from the period 1991 to 2010. The following conclusions were drawn: (1) Sediment fluxes in the Rhine are discontinuous due to regional sinks and sources, leading to a large variability of the sediment fluxes along the river channel. (2) From source to mouth, the Rhine traverses four sections with fundamentally different morphodynamic behaviour: the Alpine, impounded, free-flowing and delta section. (3) The largest sediment fluxes, which are dominated by the clay fraction, are observed in the Alpine section. (4) On a basin-scale, nourishment represents the biggest source of gravel and cobbles, and tributaries the biggest fluvial source of clay, silt and sand. In addition large amounts of clay, silt and sand are supplied to the lower Rhine delta by the sea. (5) Dredging represents a main sediment sink for all size fractions. For silt and clay, deposition in floodplains and ports represent an additional major sediment sink. Sediment output to the North Sea is limited. (6) In contrast to the typical prototype example of a river with erosion in the upper reaches and sedimentation in the lower reaches, the Rhine has net deposition in the upper reaches and net erosion in the downstream reaches. Local variations are high though. (7) More sediment is transported upstream from the North Sea into the lower Rhine delta than vice versa. (8) Floodplain deposition causes a higher loss of sediment in the upstream parts of the river than in the delta. (9) Today’s sediment fluxes in the Rhine are strongly influenced by river training works from the past, as well as by dredging and nourishment operations. (10) This notwithstanding, natural factors determine the location of the main sedimentation areas. (11) In many reaches gravel is deposited, whereas sand is being eroded simultaneously. (12) The budget analysis shows that sediment dynamics in rivers are much higher than is suggested by echosoundings or transport measurements, and it also shows that (13) sand plays a dominant role in the morphodynamics of the Rhine, not only in the sand-bed reaches, but also in the gravel-bed reaches of the river. (14) The sediment budget derived in this study provides a good data basis for improving numerical prediction models, optimizing nourishment, dredging and monitoring strategies, and for discovering knowledge gaps and setting research agendas. 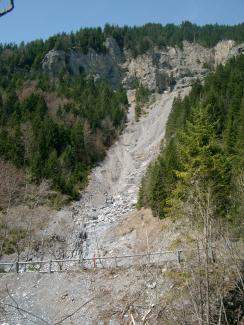