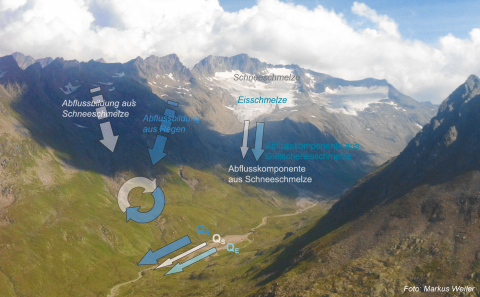 The  streamflow regime of the  Rhine (seasonal distribution of streamflow) is strongly influenced by meltwater. Therefore, there is considerable interest to know how the streamflow components of snow and glacier melt will change due to global warming and climate change.

The CHR project `The  snow  and  glacier  melt  components  of  the  streamflow  of the River Rhine and its tributaries considering the influence of climate change’ (ASG-II) will detect possible  future  developments of streamflow regimes and low flows in the Rhine basin by explicitly modelling the streamflow components resulting from input of rain(liquid precipitation), from snow melt and from glacier ice melt. The focus is on the effects of climate change on low flows in the Rhine.

The research project is a second phase following the earlier project ASG I. Within this project a combination of analyses of diverse meteorological, glaciological, and hydrological data and simulations with a specifically developed model chain was used to model and analyse the streamflow components from different parts of the Rhine basin over the period 1901-2006. The simulations showed among other results that during some late summer low flow events in the past glacier ice melt contributed significantly to river flow in the Middle and Lower-Rhine. Further results are summarized in the following project reports:

The second phase  of  the research project has the following objectives:

A focus lies on analyzing changes of the snow melt component.