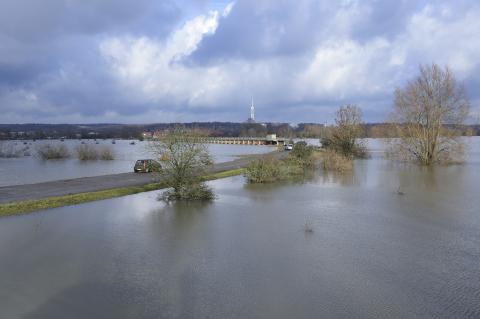 The Rhine, in the heart of Europe, is seen globally as one of the most significant rivers, especially in social-economic terms. Within the scope of the project "Discharge regime of the Rhine and its tributaries in the 20th century", the International Commission for the Hydrology of the Rhine Basin (CHR) commissioned research into if, and to what extent, in the course of the last hundred years there have been significant changes in the discharge, behaviour of the river system. This is the first time this has been investigated in such a major river basin over a long period. It could be established that the "future has already started" in the Rhine area; i.e. climate change characteristics predicted in the forecasting models for the future of Central Europe, together with their consequences for the river regime, have already manifested themselves in the hydrological events of the last 100 years.

In terms of the entire Rhine area, the volume of water in the hydrological cycle increased from 1901 to 2000: the average discharge at the Lobith station (The Netherlands, close to the Rhine delta in the North Sea) increased by approximately 11% during this period. The flood water extremes (analysed using the flood peak as an example / HQ) confirm in many cases the trend to increases; whereas the results of the time series analytical evaluation of the parameter NM7Q* indicate an existing tendency to moderation at low water extremes during the century.

However, it should be noted with this broad-synoptic statement, that there are significant regional and seasonal differences. These arise firstly against a background of biogeographic differences, and secondly various anthropogenic influences in the catchment area. Here in this complicated process structure, metrological influences in the form of temperature and precipitation increased during the century (which affect the winter months in particular), energy generation orientated reservoir management in the Alps and - in smaller sub-basins - water extractions from other river basins take the most prominent role.

The term "discharge regime" means, put simply, the regular, expected discharge of flowing water within a year. To this end it was established that the changes in the discharge regime of the Rhine in the 20th century follow two different basic models; the river at its geographical dividing line approximately at the Main estuary: the from the Alps nival** influenced regimes of the Alpine and Upper Rhine are in principle characterised by low discharges in the winter months (because ice and snow restrict the flow process) and a strong discharge caused by snow melt in the summer half-year. Temperature increases here bring about an increase in the proportion of liquid precipitation in the cold seasons, thus a reduction in the water equivalent in the form of snow as well as a shorter persistence of the winter snow cover. Winter precipitation is then no longer available for the snow melt in the summer season. This reduction of the intra-year variability leads de-facto to a redistribution of the discharge from the summer- to the winter months. This climatically induced process is intensified by the reservoir management in the Alps, which has a similar effect, whereby in summer the surface water is removed and temporarily stored and then returned in winter for energy generation (see image: station Basel).

Irrespective of the redistribution dynamics described in the southern Rhine area in total no changes, or hardly any, have been observed in the annual mean discharge. This is consistent with only minor changes in the quantities of annual precipitation. Nevertheless, a strong dynamic existed in the course of the century with exceptional discharge situations, in particularly in the case of the extreme low water discharges, which typically occurred during the winter half-year, where widespread significant rising trends (i.e. moderation) were ascertained. Even with the extreme flood peak discharge increases (albeit smaller, less trend secured) have to be proven, which result from amongst other things changed cresting peak times (e.g. as a consequence of river engineering) and an increase of heavy rain events are important. 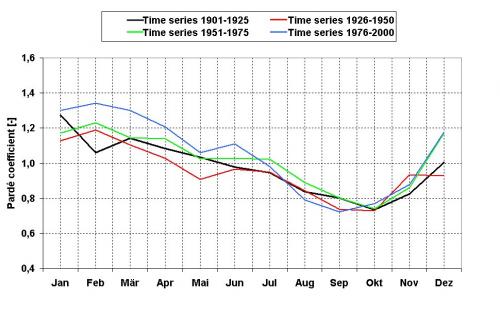 Station Basel/ Upper Rhine (above) and Rees/ Lower Rhine (below): changes in the river regime in the form of intra-year discharge in the 20 century.
(Standardisation reference: period 1901-2000)

The widely discussed "glacier retreat" is, contrary to other assumptions and media reports, not significantly involved in changes to the mean discharge behaviour of the Rhine outside the immediate Alpine region.
Example: in the summer month of August, a time of year in which glacier retreat is particularly intensive, the approximate discharge portion which is additionally caused by secular temperature increases in the Rhine at Basel is only ca. 1.2 % (ca. 15 m³/s) of the monthly mean.

A maritime climate prevails in the Mittelgebirg- and lowland regions of the northern Rhine area. Snow retention and snow melting processes play a secondary role in the pluvial*** discharge regime there. The typical flood period here is the late winter; low water prevails in late summer and autumn. In this low relief zone, the changes to the atmospheric circulation patterns have had in Central Europe with their increase in humid, precipitating climate in the course of the century a more uniform and sustained impact as in the orographic separated southern basin. Therefore, initially here in the sub-basins of the tributaries, then increasingly also in the further course of the Rhine an increase in the total discharge is to be proved, whose seasonal focus is consequently the precipitation characteristic in the already wet winter half-year (see image Station Rees). Therefore, linked to this is an increase in the trend to intensified (winter) extreme flooding. For low water situations in the northern Rhine area, but not for the river itself, but nevertheless in some cases in tributary basins, trends and statistically proven changes could be established. These were always in context with anthropogenic influences, e.g. cooling water extraction for power stations and water management extractions or supply.

CHR publications on the theme of changes in the discharge regime